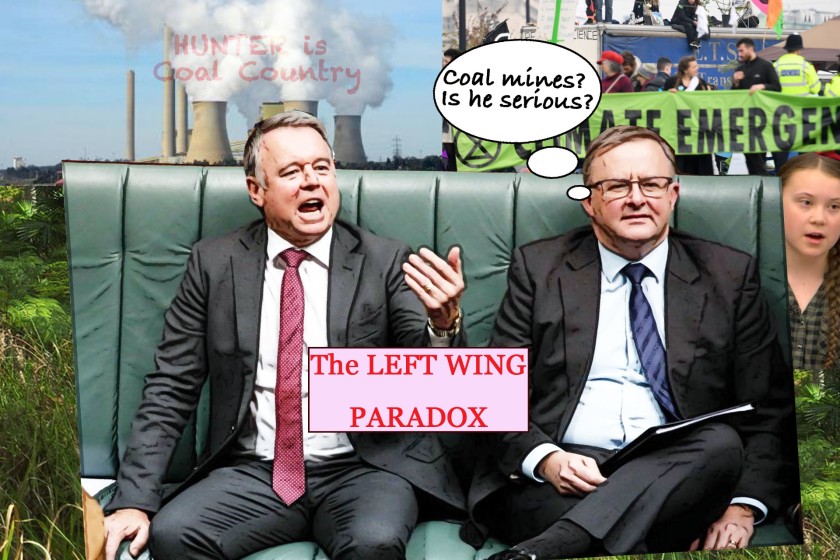 Nowhere in Australian politics is the left wing paradox more evident than in the relationship between Australian Labor Party leader Anthony Albanese and his resources spokesman Joel Fitzgibbon. The two have an obviously fractured relationship that is the essence of the identity crisis that permeates left leaning political parties throughout the western world.

The left wing paradox operates along a number of leftist policy lines. It’s where traditional leftist values meet neo leftist values, and unfortunately for the parties involved, be they Australia’s Labor Party, the UK’s Labour Party or America’s Democrats, the meeting is more of a collision. For how can a political party who bills itself as the party for the worker, then also promote a policy that reduces the wealth of the worker? How can a political party backed by workers unions promote the destruction of an industry that is a blue collar worker’s industry?

In Australia this train wreck of a meeting is happening live, in front of our eyes. Labor’s Joel Fitzgibbon represents the Hunter electorate in Federal Parliament. The Hunter electorate is home to two of Australia’s most productive ‘coal-fired’ power plants, Liddell and Bayswater. But Labor’s leader Anthony Albanese says, by 2050 Australia will have “net-zero” emissions. Labor believes the working class Hunter electorate is dumb. Their leader is sending the globalist ‘climate change’ message of world ending, apocalyptic man-made temperature change, which demands an end to the use of coal as an energy source. Meanwhile, poor old Joel Fitzgibbon represents the Hunter region where jobs are going to go bye, byes if Anthony Albanese has his neo leftist way.

Other leftist ideological collisions occur in their support for mass immigration into the west. This is very evident with America’s Democratic Party, where many of those that represent the party support dangerously high and even un-vetted immigration i.e. illegal immigration. This damages the party’s traditional base, the working class. Mass immigration creates a larger pool of workers competing for unskilled jobs, which in turn allows employers to keep wages static or even reduce them. In Australia, Labor is staring down another ideological collision on this front.

It doesn’t end there. Remember how the left bangs on about preserving the environment and saving the trees etc. etc. Stop and ask the question, ‘How will we save trees, preserve the bushland and forests, and save the lives of animals, if we continue to import immigrants’? Immigrants mean more homes, more services. More homes means knocking down forests, removing animals from their natural environments and more services mean infrastructure projects which equals less natural habitat for our furry friends. The left wing paradox is obvious.

How much longer before the rusted on working class voters split from the Australian Labor Party?