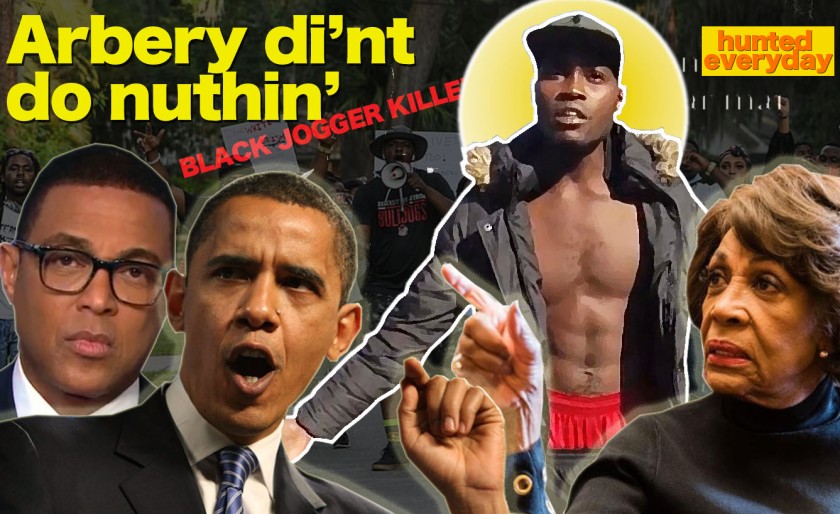 Australia’s mainstream media giants Seven News and Channel Nine are just like the lame stream media across the rest of the western world. They are experts at pedalling fake news and building stories around a tired old narrative of ‘white man bad, black man never done nuthin wrong‘. The latest in their litany of crimes against journalistic integrity came early this month (May, 2020) when they covered the Ahmaud Arbery killing.

The Channel Nine headline for this story on 7th May, 2020 was, “Killed In Cold Blood: No Charges After White Men Hunt Down And Shoot Black Jogger.” That article was written by Nick Pearson who is now a Senior Producer at nine.com.au. Meanwhile the Seven News headline reads, “Ahmaud Arbery: Former Police Officer And Son Charged With Murder Of Jogger.” Lucy Quaggin the front page editor at 7News.com.au led her report by reinforcing the same lie that Arbery was just a jogger.

Well you can thank the lord that YouTube has yet to shut down dissenting voices like that of Stefan Molyneux. I suspect it won’t be long though. Molyneux has researched the killing and streamed regular updates on the case throughout the month of May, and it’s through the Canadian that many have learnt the truth about the Ahmaud Arbery case.

Arbery was not just a jogger like the mainstream media headline dangerously suggests. He was a local punk who not only had a history of nasty interactions with law enforcement, but was also trespassing on a neighbouring property of the men accused of his murder. A major detail that is missing in the lamestream media version of this story is that one of the two men was a 30+ year law enforcement veteran. Gregory McMichael had recently retired and knew Ahmaud Arbery. Arbery had been charged for bringing a firearm to a high school, he had been involved in an incident where he was filmed abusing a police officer in 2017 after having been caught driving with a suspended licence. He was also under a 5 year probation sentence dating from 2017 for the theft of a 65 inch television. In the moments prior to Arbery’s death, he was not jogging, he was sprinting from the McMichaels who were attempting to make a citizen’s arrest. Believing that the assailant was likely the man who had stole their firearms in the months prior the men were justified in carrying guns to carry out the citizen’s arrest. But in what was the most stupefying part of Arbery’s death, he chose to attack one of the McMichaels even though he was armed with a shot gun (video illustrates this). But as expected, the mainstream media don’t want the truth to get in the way of their dirty divisive narrative.

Furthermore, the dirty signature stain of the mainstream media is all over the packaging of this incident. Look closely at the photographs used to identify the accused men and the ‘innocent’ jogger. Arbery is sharply dressed and the accused have mug shots from the police department. A further photograph of the McMichaels (father and son), sees them in khakis in what looks like a log cabin. The filthy race-baiting and dangerous mainstream media narrative is clear. The McMichaels are two red necked yokels, and Ahmaud Arbery is a clean cut African American kid just out for a jog.

The consequences of telling this story in such a manner have already resulted in bloodshed. But of course you have not heard about that.

An elderly white couple were gunned down by a 29 year old black man – unknown to them – while visiting their son’s grave at a cemetery. The cold-blooded assassination carried out with a scoped rifle by Sheldon Francis is being portrayed as a murder without motive. No, of course this is not a shocking racist hate crime. The truth is Paul (86) and Lidia (85) Marino were killed by 29 year old Sheldon Francis whom the mainstream media will dare not speculate was bent on revenge for the death of Ahmaud Arbery. No, the pop and sport celebrities who have thrown their weight behind the ‘innocent jogger‘ aren’t telling the community to calm down. They’ve got blood on their hands and they’re disappearing into the background.

But that’s not the only race-hate crime that has been come to light since the Ahmaud Arbery shooting. Infowars published footage of a black man – employed at a nursing home in the USA – punching an old white man and an old white woman in separate clips. Again, this is not reported on by the mainstream media. You have to find this at alternative news sites like InfoWars or The Red Elephants. Click the link below and scroll to the 8 minute mark to see the cowardly racist waling into a 75 year old man. https://infowarsmedia.com/js/player.js

The media must be held to account for their lies. They must be removed from all social media platforms for spreading lies and provoking violence with irresponsible reporting. Below is a list of mainstream media outlets with the various deceitful headlines they’ve used for the Ahmaud Arbery case.

Some of the idiotic virtue signalling celebrities that have called for racial justice etc etc are listed below with their twitter accounts so you can contact them for further comment on the matter.